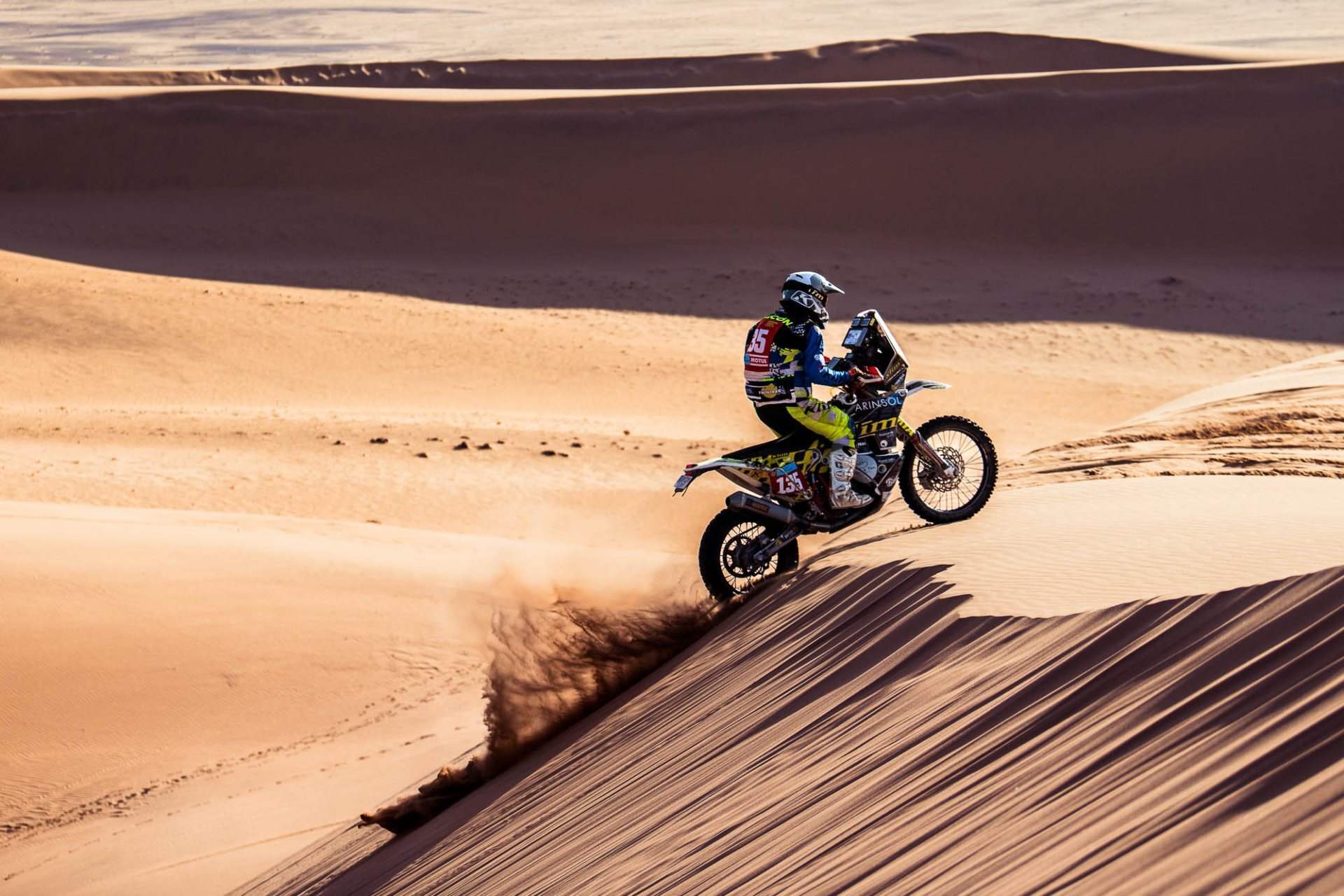 Without mechanical assistance, but working as a team

Teamwork on the 8th stage of the Dakar: Isaac Feliu helps Albert Martín in the middle of the stage so that the Spanish rider can finish the day.
The three KLIM TwinTrail Racing riders overcome one of the toughest stages of the Dakar 2022 with good marks, although also tired.

The eighth stage of the Dakar 2022 was one of the longest, with more than 5 hours of special for the three KLIM TwinTrail Racing drivers. Today they had to face a 394km special but they had to add another 434km of link, of which almost 70km of track and sailing on course. It is the second longest stage in terms of time on the bike and one of the most complicated for the sum of 100km on dunes.

Working as a team

Original by Motul riders usually participate in the Dakar on their own, without teammates. But KLIM TwinTrail Racing has given it a spin by sharing the adventure with three Spanish riders who make their debut in 2022 in the toughest rally in the world. Isaac Feliu, Carles Falcón and Albert Martín are rivals, yes, but first and foremost teammates and they are willing to help each other both in the bivouac and in the race.

In this eighth stage Albert Martín had been thrown when there were about 100km to go to the end of the special. The Valls rider had bent the chainring and he did not have the right tool to remove and straighten it. But after 10 minutes his teammate Isaac Feliu arrived, who stopped and lost about 10 minutes helping to solve the fault. “We are not professional drivers, so when I saw that Albert was stopped I did not hesitate for a moment and between the two of us we fixed the problem.” Even so, Isaac has achieved one of his best stage results on this Dakar, finishing 64th. “For me it has been a good day, the best to date, a terrain in which I feel comfortable because it was not very physically demanding but it was to go fast and the navigation was not very complicated.”

On his side, Albert Martín did not end the day so happy due to the mechanical problem. “I had planned the stage in one way and everything turned out the other way around. I wanted to start quietly in the dunes because that is where there is more risk for me, and once the refueling was over, my time came. But there a car has overtaken me and when I separated from the line, I struck a hard blow with a stone on the plate and from there, I could no longer continue with my plan. It is clear that everything does not always go the way you want it, but I’m not happy. ” Despite this, the Valls rider finished 74th after spending more than 20 minutes fixing the bike and remains 58th overall.

Slowly, but surely and every day more comfortable

Despite adding kilometers on the bike, few hours of sleep – in a tent – the days and stages are already being subtracted. “Today’s was a tough day, because it was quite a long stage, also the links, with the second one with a section of about 70km on a set following a course that was quite tough. I really liked the stage, starting with about 100km of dunes – with some fall without consequences -. But the important thing is that we add one more day but there is also one less to finish. I’m tired, but I’m fine ”, as Carles Falcón has told him about the 8th stage of the Dakar 2022. The man from Tarragona finished 80th scratch and is 74th overall after eight days of rally.

The ninth stage of the Dakar can deceive the pilots and is that apparently it can be easier, at least because it has “only” 287km of special and about 200 of connection. A loop stage that, for the KLIM TwinTrail Racing riders and the rest of Original by Motul, will give a bit of respite by not having to get up so early to clear the camp. Practically half of the stage this Tuesday, January 11, will be on sandy terrain, in addition to about 40km of dunes, about 100km of tracks and some sections with stones.