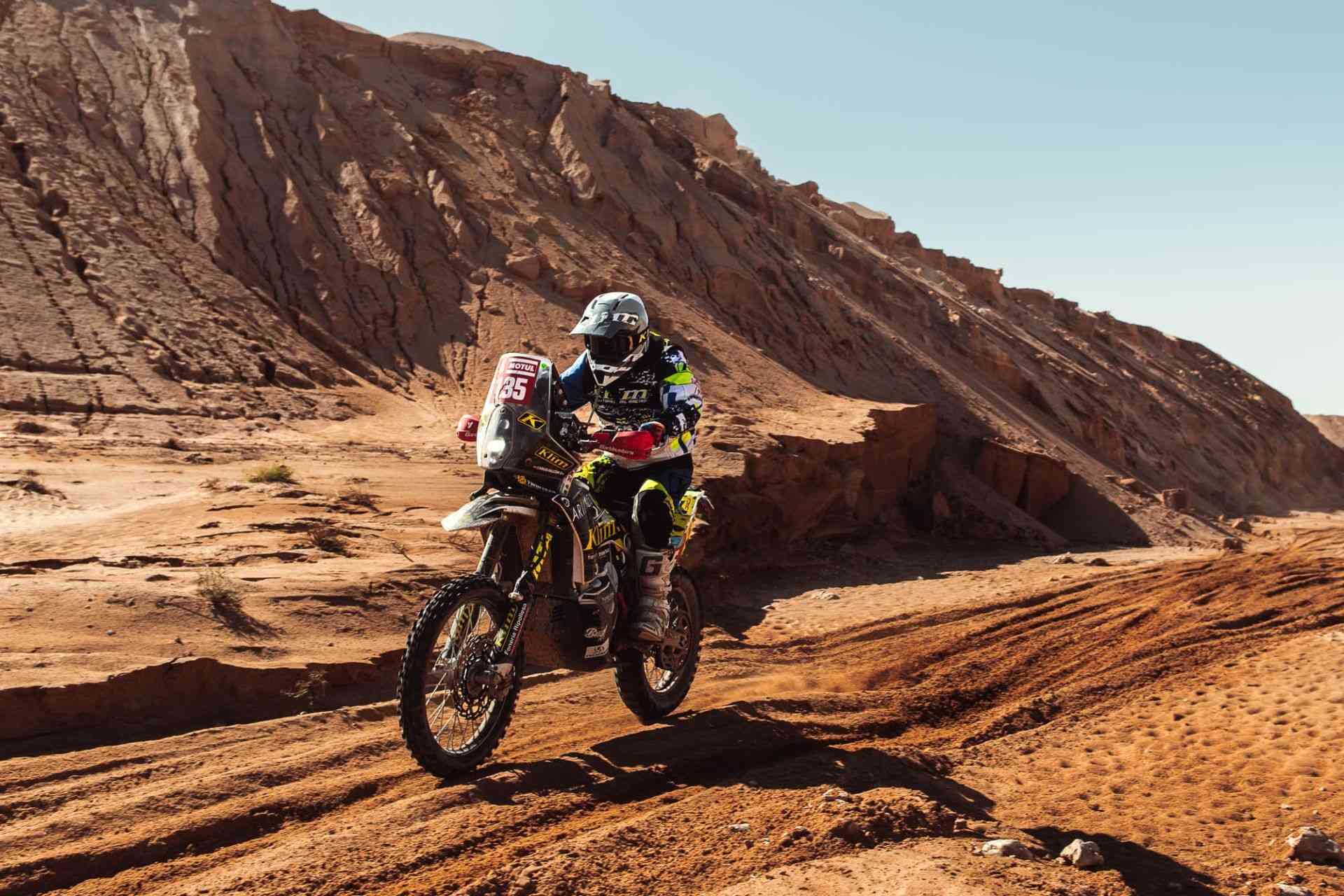 KLIM TwinTrail general comeback in the 5th stage despite neutralization

The 5th stage of the Dakar 2022, shorter than expected, due to a sandstorm.
The three KLIM TwinTrail Racing riders continue to advance positions and keep their bikes in good condition.

The fifth stage of the Dakar 2022 could be one of those that marked a turning point. The day after the longest stage of this edition of the rally, an area with a lot of stone, a river and a long final stretch of dunes. The latter has not been possible to celebrate, since a sandstorm has appeared and this compromises the safety of the participants because medical helicopters cannot fly in the event of an accident of the pilots. In this way, the Rally 2 category riders who were still in the race have been neutralized over 270km. The good part, they have done fewer kilometers and have accumulated less fatigue. Despite being shorter than expected, the three KLIM TwinTrail Racing drivers did a good job and recovered some positions in the general classification.

Navigation, stones and fast zones, the keys of the day

Beyond shortening the special, today has also been characterized by navigation. KLIM TwinTrail Racing riders who occupy positions beyond 50º tend to have fewer navigation problems as the terrain is quite marked by all the riders who have passed first. Today, in some sections it has not been like that, and they have had to be more attentive to navigation.

The fastest KLIM TwinTrail Racing rider, Albert Martín, did not enjoy this 5th stage much for various reasons. When he was only a couple of kilometers from the special, a rider crashed in front of him and stopped to check if he was okay. When he started again, he got lost. “The stage had a lot of navigation and there has been an error by several pilots, including myself, due to an error of misinterpretation of the note.” After going back a few meters and relocating, the Valls rider started to make up for lost time, going from 122nd position at km 41 to the 62nd final. Still, “it was a fairly flat stage with little appeal, flat areas and some stone sections. We had to get to the dunes but we didn’t do them because it was the area that they neutralized and so it wasn’t a very beautiful stage”, he added.

Isaac Feliu has also suffered first-hand from the navigation difficulties of the day. “It has not been my best day at the level of navigation, I have made three mistakes, but I think I have made up the lost time quite well, especially in the fast areas where I have gone on gas, to everything the bike gave, that’s why I worn out the tire. In the more technical areas I have gone more little by little, to preserve physique and mechanics. I am very well physically, there are fewer days left”. The TwinTrail founder took advantage of the fact that the stage was shorter and arrived a little earlier than usual at the bivouac to change the tires, as he had not yet done so. Feliu, with this effort of speed in the fast zones, has recovered the lost positions and after setting the 120th time in the first waypoint, the day ended 87th.

The third member of the team, Carles Falcón from Tarragona, remains faithful to his philosophy in the race, to be constant and with this today he has achieved his best stage result in the Dakar. He will not be the fastest rider, but he will be a strategist and aware of how to face a rally that lasts so many days thanks to his experience in trail running. The TwinTrail instructor took advantage of the stage that was less fast: “Today was a day with a little more navigation, already at km 3 there was a bit of a mess. A stage with a lot of stone, more broken, river areas and ravines that were more entertaining. I like the fast areas less because I don’t like to run a lot and in the more meandering areas I have a better time. At some points, there were hardly visible track crossings and that has led to more losses, and choosing the right path has helped me to advance positions”. And, having started the day in 101st position, he made a good jump and was 73rd overall.

Sixth stage, the one before the rest day

Tomorrow is the sixth stage of the Dakar 2022, also looping from Riyadh to Riyadh. The drivers will face a rather difficult stage, since it is the same route that the cars have done today. In this sense, the road will be very marked but also very damaged by the passage of four-wheelers and trucks. In addition, it will be a fairly long stage, with a timed 404km that will combine sand, track and some dunes.