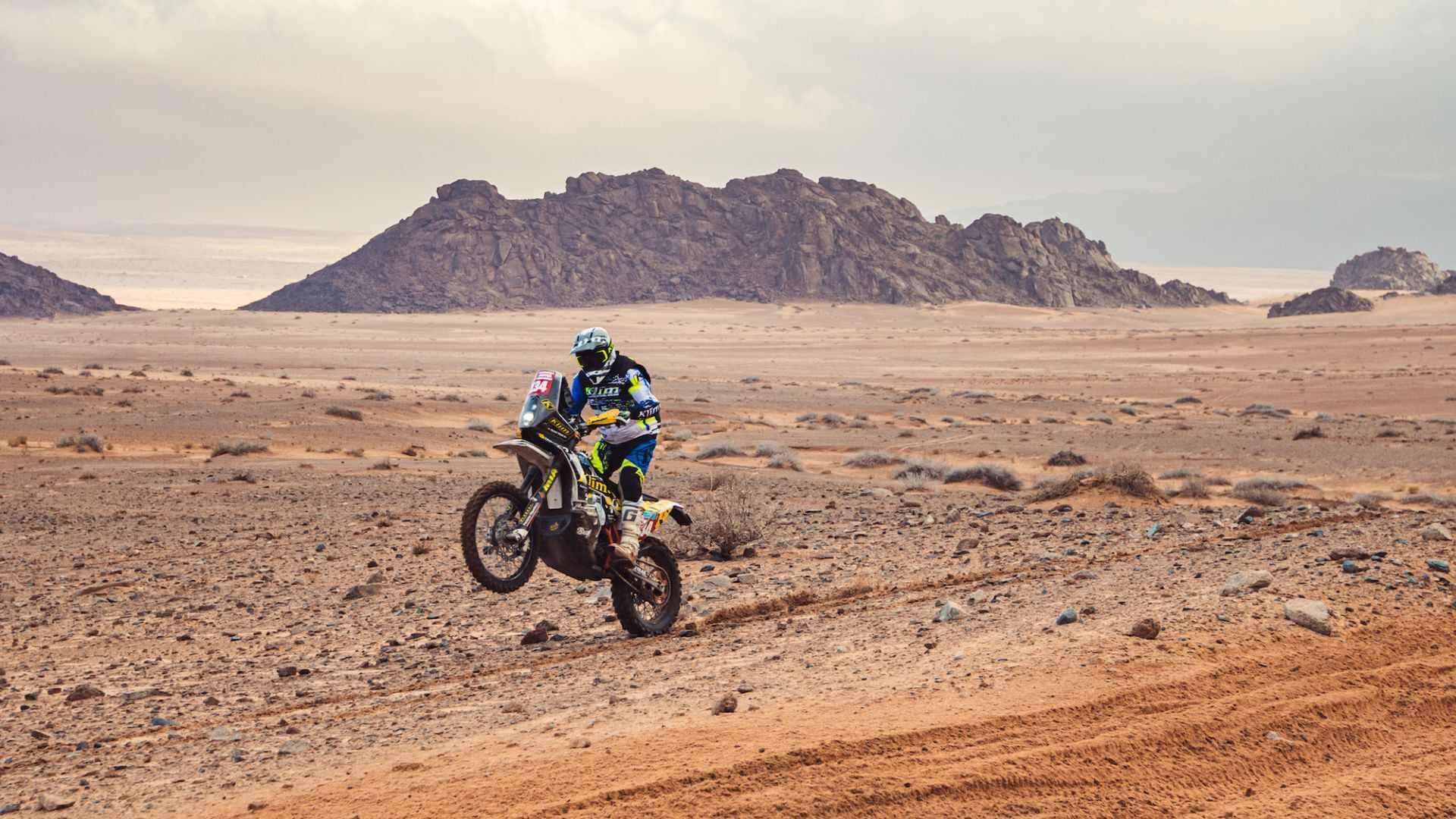 A spectacular stage, with a lot of sand and first navigation difficulties in stage 1B of the Dakar 2022.

The three KLIM TwinTrail Racing riders finished the first stage, with some crash, but wanting to continue tomorrow.

More than 9h from leaving the bivouac until returning to Ha’il, this is how the first stage of the KLIM TwinTrail Racing Team is summed up on its debut in the Dakar 2022. A fairly long stage, 333km with a lot, a lot of sand, descents imposing and generally correct navigation, but with a very delicate point in which the vast majority of pilots have lost themselves. Of course, the landscape has been spectacular. The fastest rider in the team was Albert Martín who finished 70th overall, then Isaac Feliu (71st) and finally Carles Falcón (77th).

The first part of the stage was the most placid of the day, with no apparent complications. The three KLIM TwinTrail Racing riders, Carles Falcón, Isaac Feliu and Albert Martín, reached the first caution following the calm pace they wanted. The complications came when there were only 30-40km of stage left. Surely you were beginning to notice some fatigue after a stage with a lot of sand, a large dune and no type of track or set to rest your body a bit.

Albert Martín stated that “it was a very beautiful stage but it was also very tough, he didn’t expect the first to be like this. There was a lot of sand, some interesting rocky rise ”. The injury he had a month ago still marks his riding and he cannot feel comfortable on the bike as he would like.

Albert was the only KLIM TwinTrail Racing rider who was not on the ground at this stage. Both Carles Falcón and Isaac Feliu have suffered their first falls and this afternoon they have to repair the small damages. The Tarragona rider Carles Falcón told it like this: “It was a busy day… the stage was very cool, with incredible landscapes and a lot of sand. The dunes were with heart attack descents and I have had some silly fall… suddenly I have found a curve with sand in which I have been hooked and I have had a good fall. So now I have to fix the dome and tomorrow, to continue. ”

Finally, Isaac Feliu, who also had a first crash, recounted the most difficult moment of the day in which a large number of pilots lost a large number of minutes when they could not find a waypoint that had to be validated: “a a moment in which many motorcycles and cars were coming face to face and although I know I shouldn’t do it, I turned around because I thought it wasn’t going well. So I have lost the reference of km in which I was and I have been looking without a head. We have met Carles and Albert and we could not find the WP but at one point we saw it because there was a danger 2 in the next panel and the sentinel has warned us, so we have seen that we were very close to the WP, we have validated it and we have continued. In the last 30km the terrain was a red sand with a lot of rut and pothole and there I had a good fall and as a result of this, another 3. But I have finished the first stage. Tomorrow more and better.”

In theory, the first part of the marathon stage of the Dakar 2022 began tomorrow, but due to the heavy rains this past morning, the organization had to cancel the marathon stage. The riders were to make a stage from Ha’il to Al Artwiya tomorrow, but the latter city will not be able to host the marathon bivouac because it has been flooded. Thus, the pilots will go directly to Qsysumah, where the bivouac was located after the second part of the marathon. In this way, some changes are made to the route and the connections, leaving the stage in a distance of 338km and another 453km of connection.